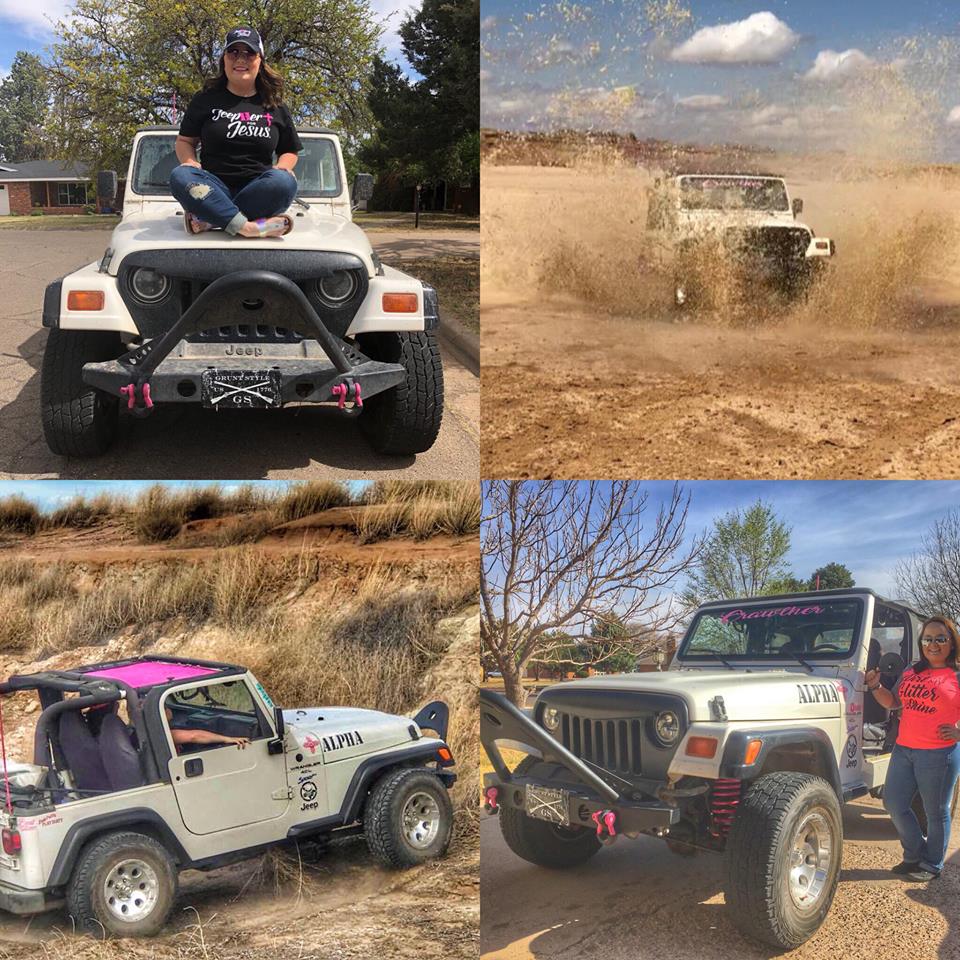 The Faces of Jeep interview with Morgan Johnson, Ambassador for Crawlher

FOJ-[Natasha]: “Why did you choose Jeep?”

Morgan: “I actually didn’t realize what the “Jeep life” was when I bought the Jeep. She was my first vehicle, and I’ve had her for 6 years. We went with Jeep because we wanted something to take to the mountains and for hunting purposes.”

FOJ-[Natasha]: “How long have you been wheeling?”

Morgan: “I started really getting into the Jeep lifestyle back in 2016, that’s when I started going out to some local areas to wheel. So not too long ago, but I wish I would’ve started sooner.”

FOJ-[Natasha]: “What upgrades have you done, and which companies would you recommend to others?”

Morgan: “As far as upgrades go, I haven’t done a whole lot. I run an E-Autogrille front bumper, and a rear one that I’m putting on soon. I have some Truckmall LED Halo Headlights. I just put on a Flowmaster Super 44 muffler, and have a Teraflex steering stabilizer. As well as a rear Dana 44 and a front High Pinion 30. My list of upgrades seems endless.”

FOJ-[Natasha]: “Where all have you traveled and where is your favorite place to wheel?”

Morgan: “I don’t live anywhere close to Jeep events, so I haven’t traveled much. I take the Jeep down to the lake during the summer. My closest wheeling spot is 30 minutes away. I love wheeling at this dairy; it has some huge sand dunes in the back. It’s a good time, all the Jeeps come out & so do the dirt bikes.”

FOJ-[Natasha]: “What are your favorite events you have attended?”

Morgan: “Since I don’t live close to Jeep events, we make our own here. My favorite one so far we have done is the Memorial Ride for “Jeepin On For Jackie”. We met up & eat lunch, and then go wheeling. It was a good time, with good people.”

FOJ-[Natasha]: “What is one of your most memorable Jeep adventure moments?”

Morgan: “About a year and a half ago, I blew my front differential. Yay me. But that didn’t stop me from wheeling, which obviously isn’t the brightest idea. There were 4 of us, and only two Jeeps. We went out to the sand dunes to wheel and I got stuck instantly because of the lack of 4WD. So my buddy pulled me out, and I was really stuck. All four of my tires were halfway buried. So he pulled me out, removed the strap, and I got stuck. Again. So he pulled me out again. This continued to happen a few more times, he finally told me to hold on and he floored his Jeep down the sand dune and drove me to a hard spot to where I couldn’t get stuck. But of course, with my luck, I got stuck instantly again. Needless to say, I didn’t go back out to the dunes until I got my differential replaced. Wasn’t the brightest idea, but it was definitely a fun memory.”

FOJ-[Natasha]: “How has owning a Jeep influenced your life?”

Morgan: “Owning a Jeep has changed my life in so many ways. I didn’t know a vehicle could bring so much joy. It’s taught me different things, and allowed me to meet so many incredible people throughout the years. The Jeep Wave is one of my favorite parts about it.”

Morgan: “Crawlher approached me about a year ago about becoming an ambassador. I was so excited. Over the year, I’ve had the opportunity to meet and interact with the other ambassadors and create friendships. My social media has grown thanks to Tiffany & Brittanie. It’s definitely an honor to have been asked to be apart of the Crawlher family. I was told that people know my Jeep around town simply because of my Crawlher windshield banner. I’m like a little celebrity around here!”

FOJ-[Natasha]: “What is your favorite part about being a woman in the off-road community and what would you say to other women wanting to get involved in the Jeep life?”

Morgan: “My favorite part about being a women in the off-road community is definitely being able to break the “norm”. Growing up, I used to think that Jeeps, cars and trucks etc. were for men. But I realized that’s not the case. I’ve met so many incredible women in the off-roading community, that prove women can do the things that men can. I think if you’re a women who is interested in Jeeps, you should definitely go for it. You learn a lot. The Jeep community is definitely like a huge family; I’m able to ask questions and get advice from so many people without fear of judgment. Plus, you can make awesome friendships with people. I’ve met some of my closest friends on Jeep pages.”

FOJ-[Natasha]: “What are some of your biggest accomplishments as a woman in wheeling?”

Morgan: “A year and a half ago, I noticed there wasn’t a Jeep club in my town. Yeah, there was an off-roading group, but nothing like a “club”. So I started one. For the longest time, I was the only female in the group. That’s where I got the name “Alpha” for my Jeep. My club, Curry County Jeep Junkies, is definitely like my second family. We all go out and wheel together, and have dinner, and just have a good time. We participate in parades, and we do memorial rides and even fundraisers. That, by far, has been my greatest accomplishment.”

FOJ-[Natasha]: “What are your future goals for yourself?”

Morgan: “As far as future goals go, I’m not sure. I’m hoping to be able to travel more, Moab is on my bucket list. I know my TJ isn’t going to last forever, but I plan on getting another Jeep in the future and building that one too! Bigger, and better than ever.”

FOJ-[Natasha]: “Thank you Morgan for sharing your Jeep journey with us. Wishing you and the Crawlher family an awesome 2018 wheeling season.”