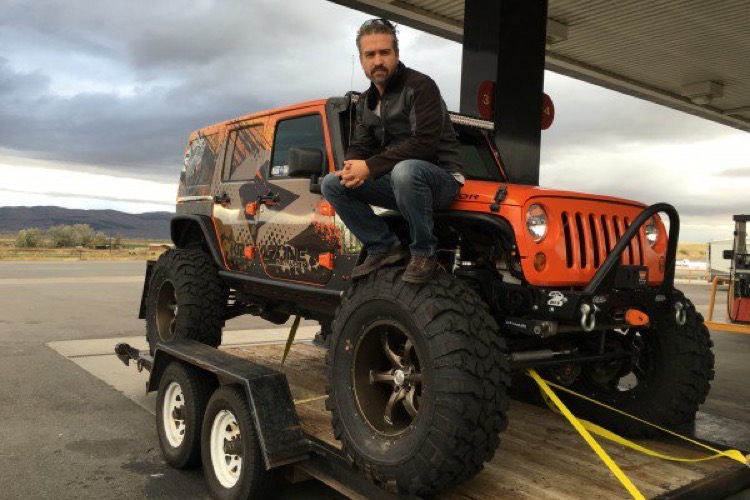 The Faces of Jeep interview with Nathan Riddle, Founder of KrawlZone

FOJ-[Natasha]: “Why did you choose Jeep?”

Nathan: “First off- I love all off-roaders now matter what they wheel. But I chose a Jeep because of its iconic military history and the family that has formed around it.”

FOJ-[Natasha]: “How long have you been wheeling?”

Nathan: “I’ve been wheeling since I was young, but nothing really hard-core until I started KrawlZone.”

FOJ-[Natasha]: “Where is your favorite place to wheel?”

Nathan: “I love wheeling in the red rocks of southern Utah, but also really enjoy the mountain terrain of the Rockies.”

Nathan: “KrawlZone began when my buddy John “Nobody” Jacobs gave me a call mid 2010. He had been watching some car shows and wanted to do something for the Off-Road community. The discussion began and soon it was fleshed out and has become what you see today.”

FOJ-[Natasha]: “What is your favorite part about KrawlZone? How do you come up with new episode/video ideas?”

Nathan: “My favorite part of KrawlZone is getting out on and adventure and making new friends. The filming part is fun, but the people and the adventure is what keep me coming back. The format for KrawlZone is really just mix between the news and a documentary, so covering events is easy. The ideas for each episode is really just a question of where do I want to go on an adventure. And that’s where we go. We film our time at the event, then I get creative in the edit and mix together the action with informative interviews and behind the scenes moments of us with our new friends on the trail.”

FOJ-[Natasha]: “What are your favorite events you have attended?”

Nathan: “I always look forward to the big Events. KOH, EJS and Winter 4×4 Jamboree I won’t miss, because that’s my home turf. The Set them Free event was one that really sticks out. Not just because it’s good wheeling, but because of the cause it goes to support.”

FOJ- [Natasha]: “What is one of your most memorable KrawlZone moments?”

Nathan: “I have so many memorable moments. Getting to go wheeling with the drummer from Poison (Rikki Rocket) was a big one. But the biggest I think was in 2016, getting the chance to co-pilot in the Every Man Challenge at KOH. We’ve filmed the event several times, but actually being in a rig, racing along in the desert in a home built Cherokee was an epic opportunity. And I’m grateful to my buddy Vic Buness of KrawlTek Racing who gave me the opportunity.”

Nathan: “KrawlZone and Jeep have influenced my life by giving me the means to get out of the daily grind and getting out of my comfort zone. They have given my passion the means to get out and experience the wonders of nature and have some wonderful adventures. And I’ve gotten another family as a result. There is an aspect of family to most off-road groups, but there is something a little different…a little more..to the Jeep community that means a lot to me.”

FOJ-[Natasha]: “What are your favorite upgrades you have done and which companies would you suggest to others?”

FOJ- [Natasha]: “Besides the permanent mounted parts on your jeep, what accessories or spare items do you bring just in case of emergency?”

Nathan: “In case of emergency I’ve always got a picnic blanket and some snacks. I’m an optimist.”

FOJ-[Natasha]: “How much time do you spend filming and editing to make an episode?”

Nathan: “A full episode can take Me around 3 weeks to produce, from filming to final edit. It’s a lot of work, but the result of producing a professional product is always a good feeling.”

FOJ-[Natasha]: “Thank you Nathan for sharing your Jeep journey with us. Keep up the awesome work. We look forward to watching KrawlZone grow and wish you the best in the future.